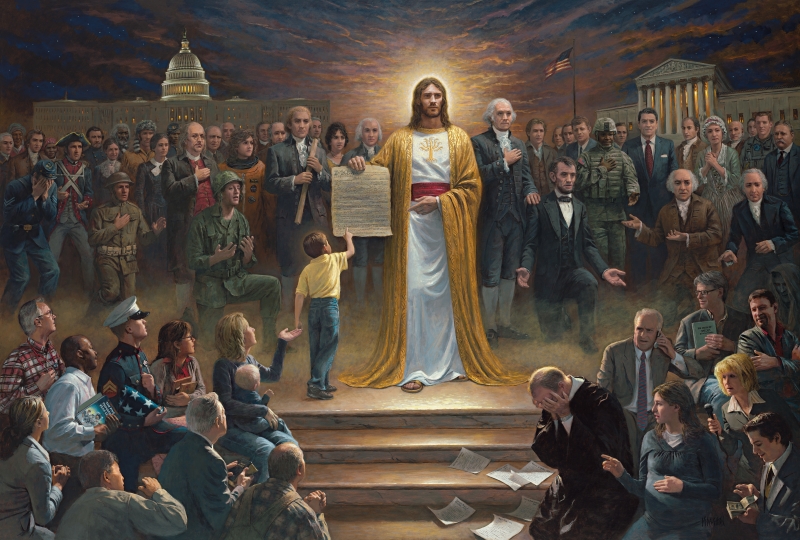 © McNaughton, One Nation Under God

PLAQUE on STATUE of LIBERTY 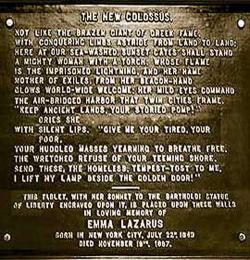 Not like the brazen giant of Greek fame,
With conquering limbs astride from land to land;
Here at our sea-washed, sunset gates shall stand
A mighty woman with a torch, whose flame
Is the imprisoned lightning, and her name
Mother of Exiles. From her beacon-hand
Glows world-wide welcome; her mild eyes command
The air-bridged harbor that twin cities frame.
“Keep, ancient lands, your storied pomp!” cries she
With silent lips. “Give me your tired, your poor,
Your huddled masses yearning to breathe free,
The wretched refuse of your teeming shore.
Send these, the homeless, tempest-tost to me,
I lift my lamp beside the golden door!”

Thousands, even millions, have read these words by Emma Lazarus as they passed by the Statue of Liberty on their way to The Land of Promise – The United States of America. 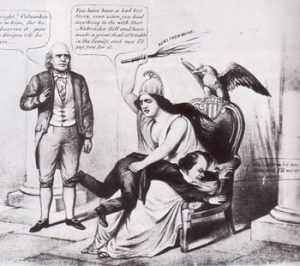 1860 Political cartoon of Stephen Douglas being spanked by Columbia as another
figure looks on (Brother Johnathan or early Uncle Sam?)

Uncle Sam: Right! Columbia (Columbia is the feminine
personification of the United States of America.), give it to him, for he deserves it; give
it to Steven till he cries…

Columbia: You have been a bad boy, Steve, ever since you had anything
to do with that Nebraska Bill and
have made a great deal of trouble in the family, and now I’ll pay you for it

Douglas: No! Please let me free and I’ll never do it again!

Who can deny that America is a unique country unlike any other? Indeed, she has tipped the scales in favor of freedom on many occasions, and has shared her wealth and knowledge with the world.

Now the time has come to endow her with the book that was prepared by God 2500 years ago to be used as her handbook – the Book of Mormon. The Book of Mormon says that God would set up a Standard whose words would hiss forth to all the earth:

1 But behold, there shall be many—at that day when I shall proceed to do a marvelous work among them, that I may remember my covenants which I have made unto the children of men, that I may set my hand again the second time to recover my people, which are of the house of Israel;
2 And also, that I may remember the promises which I have made unto thee, Nephi, and also unto thy father, that I would remember your seed; and that the words of your seed should proceed forth out of my mouth unto your seed; and my words shall hiss forth unto the ends of the earth, for a standard unto my people, which are of the house of Israel; (2 Nephi 29:1-2)

Continuing, the Lord said that when the Book of Mormon would come forth, the Christians would not accept it:

3 And because my words shall hiss forth—many of the Gentiles shall say: A Bible! A Bible! We have got a Bible, and there cannot be any more Bible.
8 Wherefore murmur ye, because that ye shall receive more of my word? Know ye not that the testimony of two nations is a witness unto you that I am God, that I remember one nation like unto another? Wherefore, I speak the same words unto one nation like unto another. And when the two nations shall run together the testimony of the two nations shall run together also. (2 Nephi 29:3,8)

All truth passes through three stages: First, it is ridiculed; Second, it is violently opposed; Third, it is accepted as self-evident.

The Book of Mormon is the Second Witness from God that Jesus lived, died, and rose again. It is also the voice of promise confirming that America is The Land of Promise – a veritable New Jerusalem, foreordained by God to proselytize the Good News of Jesus Christ to the world, restore the Jews to their homeland, and prepare for the Second Coming of Jesus Christ.

We (the current inhabitants of The Land of Promise) have inherited a strong mandate that we must worship the Father in the name of Christ or be swept off the land (as the Nephites were).